When it comes to choosing a world-class MBA program, the dice still falls in favor of the United States which is after all more than 100 years old. But things are changing now and a glance at numbers suggest that more and more business schools across Europe, Asia and Australia are attracting the best students and faculty from across the world. To remain competitive and be on top these same institutes are willing to spend more time and money ensuring that their faculty and campus are top quality.

But what are the real pros and cons between choosing an MBA program in America, or any of the ever-increasing breadth of courses offered in Europe? And what are the significant differences between American and European MBA programs?

In terms of the growth in students and ranking, Europe is fast catching up to the United States. Promising to simplify degree qualifications and nomenclatures, the 1999 Bologna Accord has added some uniformity to European higher education. The purpose of the Bologna Process (or Bologna Accords) is the creation of the European Higher Education Area by making academic degree standards and quality assurance standards more comparable and compatible throughout Europe, in particular under the Lisbon Recognition Convention. It is named after the place it was proposed, the University of Bologna, with the signing in 1999 of the Bologna declaration by Education Ministers from 29 European countries. About 46 countries including all the 27 members of the European Union, with the exception of Armenia, Azerbaijan, Belarus, Georgia, Moldova, San Morino, and the Ukraine have decided to adopt the Bologna Accord this year – 2010. The continental business education market has grown as a result, particularly for Masters in management courses.

With more than 500 MBA programs being offered in Europe and nearly 700 in the United States it is still a tough choice for students to decide which continent to go to. But what are the basic differences between the two regions? Speaking generically, schools in the U.S. are much larger with an average student strength of nearly 300 while in comparison European schools have an average student population of around 125 for an MBA program. The second distinct difference is the length of the program. Typically speaking a European MBA is one year in length while a U.S. program runs for two. Leading and well reputed American business schools might have more world renowned faculty than European schools but that does not necessarily make the programs superior. The faculty might be famous but may not be actually great teachers and also with busy careers the amount of time they devote to students might be extremely limited.

An important difference is that European schools have a significantly higher percentage of non-national students and faculty members than their American counterparts. Of the top business schools in the United States - Wharton, Columbia and Harvard - roughly 33 to 45 percent of students came from abroad. That figure is close to 90 percent at some of Europe’s top-ranked business schools, including London Business School and INSEAD. A survey of the proportion of overseas faculty members at those schools reveals a similar trend.

Clearly, differences in MBA programs reflect the differences in national and regional business cultures. But like globalized business, b-schools around the world are becoming more alike each year, with many school’s developing globally-focused curricula. Meanwhile, dozens of new trans-national partnerships are developing between US, European, and Asian business schools.

Wherever one chooses to study, doing an MBA abroad is arguably the best-possible introduction to business life in that country. And most would agree that taking up the challenge of studying abroad cannot be only financially rewarding, but personally rewarding, too.
Posted by Credila Education Loan at 3:09 AM 10 comments:

Is It Worth Spending Over Rs.20 Lakhs For An MBA Program Abroad? 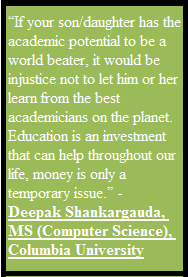 An MBA costs a lot of money and requires effort. For those who are aiming for B-schools abroad, the fact to be remembered is that these programs can cost upwards of Rs.20 lakhs. So the question which crops up is, is it worth?
To answer this question one needs to look at both the short term and long term advantages of studying abroad and then mapping these to one’s personal expectations from an MBA. Some of the key advantages of a foreign MBA are:

Internationalization: Foreign universities have students from all over the world. So, from the word `go’ it is global exposure in terms of interaction. This sets up a student for a global work atmosphere which is key to landing a job with a good international organization. A typical classroom might have around forty students from diverse cultures and backgrounds and this is one of the most remarkable benefits of studying abroad.

Exposure: An MBA abroad would mean relocation to a foreign country and this gives students the added advantage of living in a foreign country and adjusting to the culture and life style there. This preps up the student for a future in which it might be necessary to live abroad or travel frequently.
Course structure and faculty: One of the key factors which can influence this decision positively is the faculty in international B-Schools. Highly literate and from diverse backgrounds, the faculty comes with the exposure and experience to recount global case studies and international experiences giving students the rich exposure that a program such as this rightly deserves.

Cost: is a large deterrent when deciding to procure an MBA abroad, but when you look at the job opportunities as well as the salary structures which await international MBA students then this factor diminishes and loses its importance. A typical post-MBA job abroad might get a salary of US$100,000 which works out to approximately Rs.45 lakhs. When weighed against an investment of say around Rs.20 lakhs, it makes monetary sense to opt for a program which ensures that your efforts were worth it.

Better Compensation: Senior level roles offer greater compensation and there is proof that an international MBA in a CV can result in salary growth along with a great starting salary. The top ranked schools in the FT Global MBA rankings reported increases in salary of over 100% and all schools, in the 100 schools ranking, reported increases of over 50%.

Career propulsion: An MBA abroad sets up a student for a career jump in India as students with international MBAs are wanted and offered good positions in leading organisations. Also, if the student is looking for a career abroad, then it is extremely likely that an international MBA will be favoured more than a local one. Thus, an MBA abroad ensures that the student lands his or her dream job soon after completion of the program.

However, while all these reasons make great professional strength, the most important question to be asked is not whether it is worth spending Rs.20 lakhs but more importantly, will this program help me to achieve my personal goals. So while the answer to this question remains personal, overall it makes huge sense to go for an MBA abroad.
Posted by Credila Education Loan at 12:19 AM 6 comments:

In Today’s Economy Should An Engineer Pursue An MS Or An MBA? 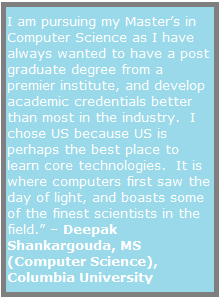 However this question should not be based on the value of the degree but more on what the person wishes to do. If an engineer does not wish to become a manager ever but would prefer to climb the technology ladder or pursue academics as a career option, it is obvious that an MBA would be a wrong choice and an MS makes more sense. However, if the engineer views his future in a managerial position where he or she will manage an end-to-end project or business center then an MBA is required. This is the best way to take the first step in deciding whether to choose an MBA or MS.

To help make a decision listed below are some of the key differences between the two programs for an engineer. An MS is a continuation to the engineering stream and provides for more in-depth knowledge. If the graduation has been completed in one’s own country, an MS in a foreign country adds to one’s resume’s weightage even as it provides a new experience of living abroad. MS is also more cost effective than an MBA.

MBA on the other hand is a brand new stream and therefore requires a paradigm shift in learning as the subjects, course content and even the way the course is conducted is very different from an engineering program. It is also a sure way to ensure a managerial position in an organisation. Engineers who obtain an MBA can move away from hard core programming and testing jobs to jobs in marketing, sales and business development where there is less programming but more opportunity to meet and interact with customers. This becomes especially interesting if the company’s customers are international as it provides for frequent travel to international locations. Engineers too get to travel to customers’ centers but it is more towards the final stages of a project when the call of duty can be stressful.

Another factor to be considered when deciding whether to pursue an MBA or an MS is the basic personality type of the person! A technology oriented person who is introverted and prefers to spend a lot of time in solving problems may find that MS provides that additional knowledge to understand and resolve engineering challenges. An outgoing personality may find a pure, hard core programming job lonely and depressing. Choosing a job profile which clashes with one’s personality is to set one up for failure in the long run. Hence people with more outgoing personalities will do well to pursue an MBA as the field opens up to choose different job streams within an engineering environment.
Posted by Credila Education Loan at 2:46 AM 7 comments: