IMPORTANT QUESTIONS AND ANSWERS FOR PARENTS AND STUDENTS

The first difference which is most visible in today’s environment is the exposure a student gets when he studies abroad versus in India. Exposure as the term means is visibility – visibility into a new culture, new environment, new surrounding, new set of people, new education system, new campus the list is endless.

This is by far the biggest and most visible difference. Some people may raise the question as to why is it important to understand another country’s culture and environment, without focussing on our own? Valid question and the answer is, with expanding horizons, improved economic conditions, technological advancement, countries are slowly losing boundaries and merging into global markets. As the student completes his education and steps into a workplace, the better companies work as global conglomerates and the advantage of understanding two different countries, i.e., India and one more, becomes an added advantage.

You may argue that the student prefers to work in India and therefore understanding another culture is unimportant. Once again, point taken, but as lately seen, Indian companies are now acquiring foreign companies. Indian companies have global set ups with offices in other countries. This is not just limited to larger organizations, but even small companies now boast an office or two in Europe, US and Asia. There is no doubt that education abroad will be vital in working in such organizations.

Secondly, the education system itself is crafted and created to ensure that students get the best out of the curriculum. Vast libraries and reference material help the student to refer and learn better. In some universities, students can opt for additional coaching in preferred subjects. The options of subjects within courses give students the freedom to pick his or her choice of subjects. The campuses and the facilities provide the student with a healthy multi cultural experience.
Finally, it is the preferential treatment which a candidate from a foreign university receives in the
job market. Most companies evaluate prospective employees from the perspective of academic soundness but more importantly on the basis of his or her interpersonal and team play skills. A student who has studied abroad has mastered interpersonal skills to some extent and by living amongst students from various races, has already been groomed to be a good team person – hence within the job market, a foreign degree holds a lot of attraction.
In summary, education is the pathway for a great career and this is enabled by a degree abroad..

“In a shocking development, the three-member R C Bhargava committee report has revealed that the Indian Institutes of Management (IIMs) have not been fair to every meritorious candidate. High fees and scholarship rules that vary from one IIM to the next have kept deserving candidates out.” - Times of India, October 20, 2008 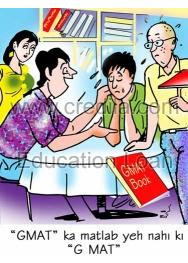 The feeling that the IIMs are not fair to meritorious students and the unfairness of its admission policy has been stated clearly in the Bhargava Committee Report. However, according to a professor from a leading School of Business, Texas, the difference in admission policies between Indian universities and those abroad is hugely different. And according to this professor, several candidates who had passed out of IIM still chose to do a second MBA from a top business school abroad!

The two major differences are, top business schools admit candidates with far more years of experience than the IIMs and secondly, the emphasis on multiple-choice entrance exam is really high in the case of IIMs while top business schools do not all use the GMAT as a hurdle.

To join an IIM one has to clear the CAT, move on to personality tests, group discussions and personal interviews. CAT tests require a lot of analytical skills which non engineering students find extremely difficult. Questions in the areas of Sequences and Series, Functions, Permutation and combinations, probability, Number Systems, among others cannot be attempted by students who have a non science background. If the selection criteria itself is so confusing and warped, why would you want to opt for IIM?

Universities abroad offer, engaging, analytical learning, team-based projects, and working with real-world issues and organizations – tools which are necessary for students to succeed and thrive beyond university life. To collaborate on learning teams, course projects, and extracurricular activities, students connect with information – and each other – 24/7, from anywhere in the world.

www.credila.com
Posted by Credila Education Loan at 6:21 AM